To KG in Oregon, Who Knows So Much That Isn't True

KG in Oregon recently visited my alternate blog site, The Pesky Truth, to leave his or her canned rant about Donald Trump.  Curious, I peeked in on his or her website, where the following questions are posted on the homepage: 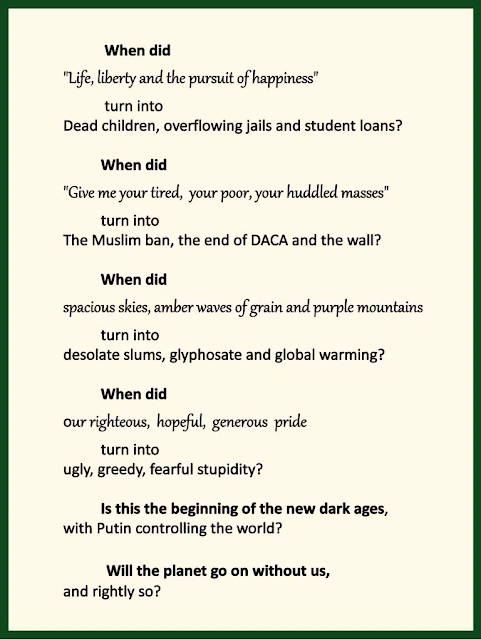 In the interests of helping to educate my fellow citizens on the Left whose precious prejudices have blinded them to the truth of what’s happening to our once great nation, I’d like to answer KG’s questions for him or her.  Here goes:

“When did ‘Life, liberty and the pursuit of happiness’ turn into dead children, overflowing jails and student loans?”

I’m not sure what dead children you’re talking about, but the jails are overflowing because of the Left’s misguided and failed “war on poverty,” which turned the U.S. into a welfare state when we started rewarding unwed motherhood.  66% of black children and 42% of Hispanic children grow up in single-parent households, usually in poverty and without a steady father in the home.  85% of all youths sitting in prisons grew up in a fatherless home, because without the role-model, income and discipline of a dad these kids get involved in drugs, gangs and crime.  THAT’s what happened.  Thanks for asking.

And you’re wondering about student loans and why so many young adults are deeply in debt nowadays?  Follow the money!   Ask yourself who benefits from the student loan industry.  Teachers and university administrators (mostly Democrats) that’s who.  “At the end of 2008, right before Obama was inaugurated, the total student loan debt was $640 billion. By March 2015, student loan debt was $1.19 trillion.” By 2016 it was $1.3 trillion.  You think that’s a coincidence?  You think Obama and the other leftists don’t know exactly what they’re doing?  They’ve been using student loans as another form of welfare (just watch a few episodes of Judge Judy and see how many so-called “students” are attending college “on-line,” just as a means to get money to live on and spend as they please).  Now comes the kicker to the scheme:  student loan forgiveness.  The money went into the pockets of the professors and administrators running the leftwing universities, and now the taxpayers are being pressed to pay it back for the “poor students.”  It’s a giant theft scheme, orchestrated by your friends on the Left.  And if the young folks end up having to repay their loans (which they should), the Left doesn’t care.  They know they can blame the mean old Republicans for holding people accountable to pay their own debts.  That’s what happened.  Thanks for asking.

“When did “Give me your tired, your poor, your huddled masses” turn into the Muslim ban, the end of DACA and the wall?”

First let’s dispel the lie of the “Muslim ban.”  This is a lie the Left resorts to because it sounds much worse than the truth, which is that any bans or enhanced restrictions are aimed at countries that are known for their incidents of terrorism and their inability to adequately background check their citizens.  It just so happens that these countries have large Muslim populations.  That’s a black mark on Muslims, not on us.  If you’re sincerely worried about dead American children maybe you’d like to join us in preventing the immigration of terrorists.

The impetus for all of these things – the focus on Muslims, the end of DACA and the wall – can be traced directly to the bad behavior and bad citizenship of liberal Democrats like yourself.  Immigrants who assimilated were welcomed and embraced in this nation for many decades – and it was a win-win for all – until the Left saw an opportunity to grow its voter base by catering to the illegals at the expense of American taxpayers (because the leftists ALWAYS find a way to make someone else pay for their agenda).  Free school, free healthcare, welfare benefits, and we provide the businesses, customers and infrastructure so they can earn money here and send billions back home to Mexico.  That’s how resentment was created, and since we know the Left will ALWAYS be on the opposite side of what’s good for this nation a wall is the only option left to us.  You leftists are 100% responsible for that.  And DACA?  The so-called “Dreamers” are here because their parents did the wrong thing and brought them here illegally.  Barack Obama doubled the problem by using an unconstitutional act to correct a problem that the Left and the illegals created.  Trump is the only one who stood up for the law, at least I hope that’s what he does.  That’s what happened.  Thanks for asking.

“When did amber skies, amber waves of grain and purple mountains turn into desolate slums, glyphosate and global warming?

Do you drive a car or use appliances?  These things are created in factories.  Industrialization provides us all (yes, even you leftists) with modern conveniences but slums are a by-product of that and it happens everywhere, not just in the U.S.  But I will refer you back to my answer to your first question.  Poverty, which leads to slums, is greatly exacerbated by unwed motherhood, and unwed motherhood has been on the rise due to the policies and practices of the Left that discourage the traditional family structure.

As for glyphosate, life expectancies in the modern world have increased as a consequence of modern science that finds ways to improve crop production, resulting in significantly less starvation.  Starvation.  Yes, it’s imperfect and sometimes there are trade-offs but only a leftist would think it better for people to starve than to consume food that isn’t perfectly organic.

Barack Obama was so worried about global warming that he and Michelle took Air Force I on date night from D.C. to New York.  All of the Hollywood leftist elites and politicians like Obama are so worried about global warming that they buy multiple homes (which they heat and cool and travel between) where they can relax while worrying about this serious problem.  The lies and manipulations on global warming are well-documented, but even those scientists who believe that man is responsible for “climate change” (because the cold weather was causing a problem with the warming rhetoric) say that spending trillions will make no perceptible difference in the climate.  So why is this a pet issue of the Left?  Because (a) it divides us politically and division always helps the Left; and (b) he who controls energy production controls the world.  That’s what happened.  Thanks for asking.

“When did Our righteous, hopeful, generous pride turn into ugly, greedy, fearful stupidity?”

If you’re talking about the support for Donald Trump, since when is it “greedy” or “ugly” to want to return to the days when America had an abundance of jobs and the American Dream was within reach of the average citizen who worked for it?  Some of us would say that those who demand to be given what they didn’t earn (never-ending welfare, free healthcare, free school…) are the ones who are truly greedy.

“Fearful stupidity.”  What does this even mean?  The thing I fear most in this world is people like you, because your ignorance and willful blindness knows no bounds.  You give our hard-earned treasury away to freeloaders and trespassers, appease hostile nations who’ve sworn to pursue our destruction, opened our doors to people who hate us, destroy the traditions and values that always made our children strong, productive and independent and turned this nation over to leftwing politicians whose only goal is to secure their own power no matter what it takes.  That’s the answer.  Thanks for asking.

“Is this the beginning of the new dark ages, with Putin controlling the world?”

Why don’t you ask Barack Obama, who whispered slyly into the ear of Russia’s Prime Minister, Dmitry Medvedev and asked him to tell “Vlad,” “This is my last election. After my election, I have more flexibility.”  What was your response to that, pray tell?  Give us the link to the post where you voiced your fears back then, please.  Also, since you’re so concerned about Putin, did you vote for Mitt Romney when Obama ridiculed him for saying that Russia was our greatest geopolitical threat?  How come you are only just now concerned about Russia, you old fool?

“Will the planet go on without us, and rightly so?”

If you want to see the perfect example of a nation destroying itself, look at what the socialists have done in Venezuela.  This is a country rich in natural resources that was once thriving, but socialists like yourself have turned it into Hell on Earth.  You vote for a socialist like Bernie Sanders, or the ultra-corrupt Hillary Clinton (enabler to Bill the groper and rapist), and you have the nerve to fret and shiver over Donald Trump.  Trump wasn’t my first choice and he’s far from perfect, but he loves this country.  This country, as opposed to the “transformation” away from the Founders’ vision that leftists like Obama, Clinton and Sanders salivate about.  Will the planet go on without us?  Who cares?  I only hope the people of the world can survive the foolishness of leftists like you.